In 2011, I was based in Skopje because of an internship. Living in Macedonia made such a mark on me that to this day, I can still go over all the details in my mind from my time there, as though it was yesterday. I never quite forgot the country and I almost dreaded to go back – out of fear that so much would have changed, just like I had.
Last year I finally made the decision to go back as the timing was perfect. After a pretty heavy break-up I needed a getaway, and lucky for me Wizz Air had just opened direct flights from Oslo to Skopje the week before. 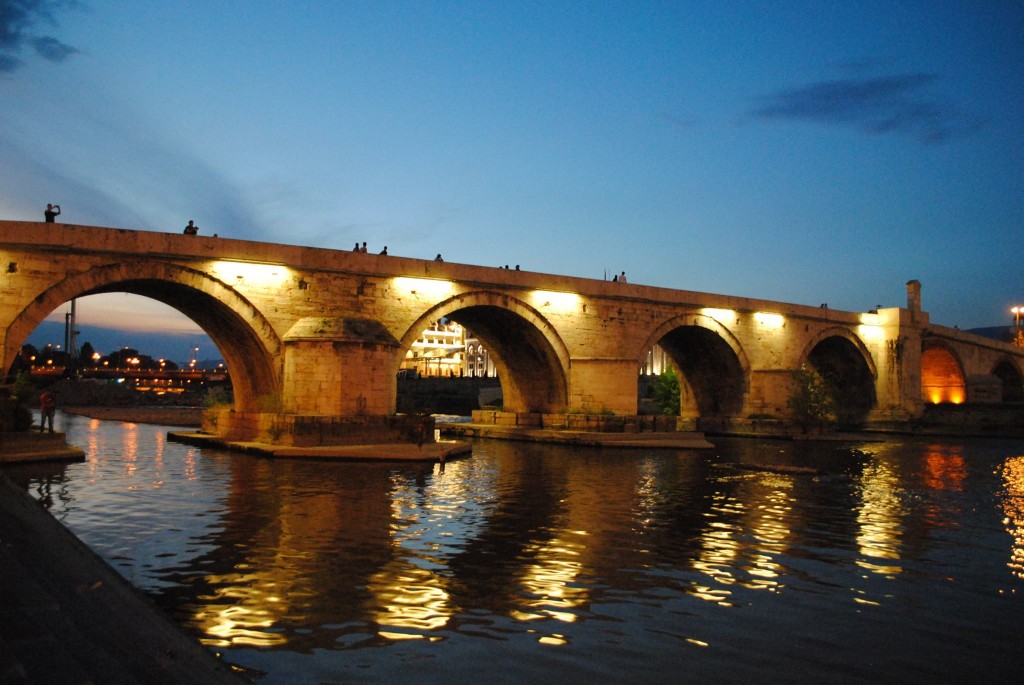 Making a pretty impulsive decision, I decided to book a one-way ticket to Skopje in July, not knowing when I would return to Oslo. Already on my way to the airport, I could suddenly hear the very familiar Macedonian language all around me, families living in Scandinavia going home for the summer to visit their relatives. It instantly took me back 4 years! How exciting it was to finally go back!
Arriving Skopje, everything seemed so familiar. The summer haze, the smell from the bazar, the busy pace, the unbelievable noise compared to quiet Norway, the somewhat surprisingly green surroundings despite the heat, the calm river Vardar splitting Skopje in two and wonderful Vodno, the mountain towering over the city where I had spent so many weekends hiking. 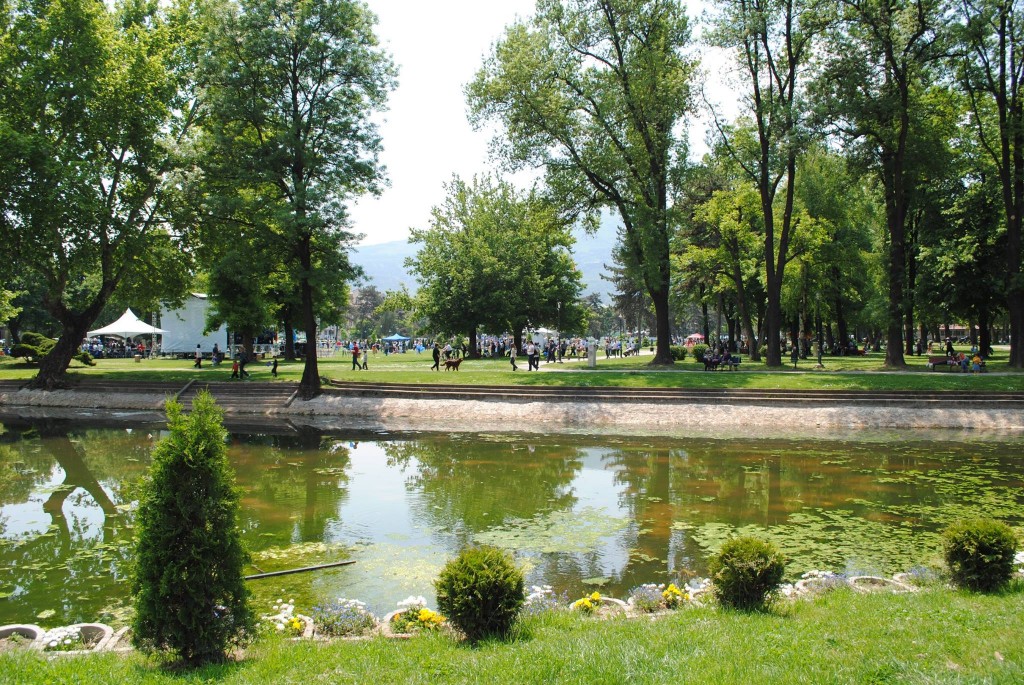 Since my decision to visit Skopje was rather impulsive, I didn’t want to ask my friends and ex-colleagues last minute whether I could stay for some days, so I had booked a room through Airbnb for a few days as a start. My hosts were the lovely couple Ivana and Viktor. I really couldn’t have asked for better hosts. My first evening there, they took me out to a bar in the bazaar area on the eastern bank of the Vardar River, and introduced me to some of their friends. And what a sensation it was to finally taste some fine Macedonian wine again! Former Yugoslavia was among the top-ten wine producing countries in the world before the breakup, and when the production was at its peak, Macedonian wine accounted for around two-thirds of the Yugoslav wine production. There are still some really nice wineries in the southern part of the country. One of the oldest is lovely Popova Kula in Demir Kapija, whom I paid a visit to the last time I was in Macedonia. Among the finest wines of Europe, I was definitely going to bring with me a few bottles back home! 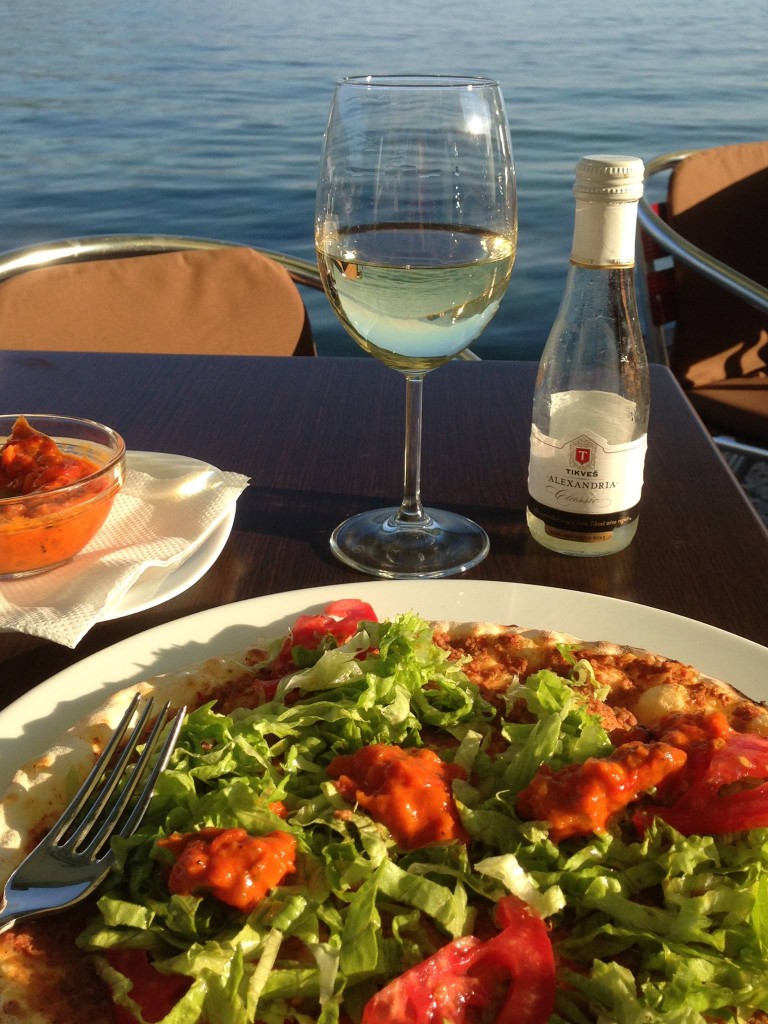 The day after, I tried to acclimatize to the burning summer haze of Skopje. Leaving rainy and chilly Norway and waking up to 40 degrees Celsius and not a cloud in sight, is no joke. I visited my old neighborhood, had lunch with some of my old colleagues, did some shopping, and had a stroll in the old town and around the Kale fortress. Skopje is definitely not the typical European big city like London or Paris, but it is a cross section where the East meets the West, and therefore a really interesting city to visit. Due to the devastating earthquake in 1963, there’s also much rather unusual architecture in Skopje, like the quite eye-catching post office. Well worth a visit 😉

I ate some more (just because I can’t get enough of the Macedonian signature salad, Shopska salata with the world’s best cheese – sirinje), before I sought shelter from the sun under a tree in Skopje city park. In a city where new buildings are popping up everywhere, this green and peaceful park alongside the Vardar River is a hidden treasure where I spent many afternoons after work while living in Skopje.
My Airbnb-hosts Ivana and Viktor were kind enough to let me stay for a bit longer in their lovely apartment, even though they were off to Barcelona themselves the next day. While hanging out at the bar the night before, they introduced me to their friend Bojan, who promised to take me on a hike up to Vodno, the mountain situated on the southwestern side of Skopje. A pretty experienced hiker, I must admit I was a bit skeptical hiking in the burning Macedonian sun, but when a local guide offers to come with you, no is not an option.
Bojan and I started out early the morning after, to try and avoid the burning sun as long as possible. With plenty of water and literally covered in sun protection factor ‘highest ever worn’, we made our way to the top and to the Millennium cross. A lot of people hike up to Vodno on the weekends. For those unable to walk there, another option is to go to Sredno Vodno by bus, and take the cable car all the way to the top. 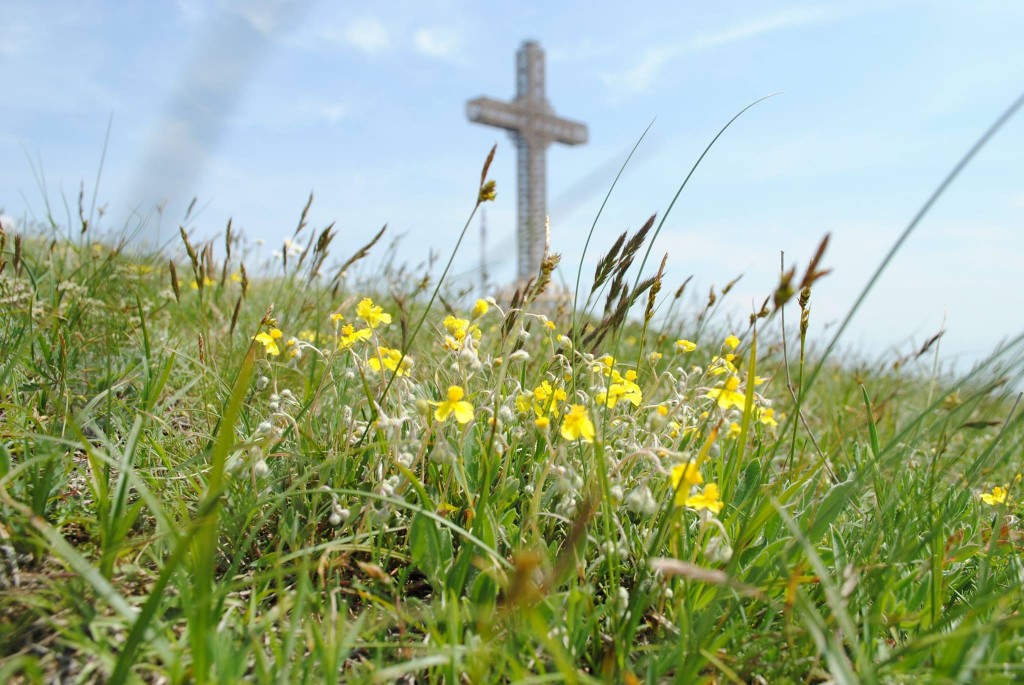 The view from the top was as stunning as I remembered. Summertime, Skopje is often covered in smog, but not on that particular day. We could see for miles. Because of our early start, the mountain was not crowded, and we sat down for a quick rest. Bojan told me that he and some friends now were in the first phases of starting up an adventure tourism agency. A brilliant idea and just the stuff I missed when I was living there four years ago! Their agency, Time for Macedonia, offer to make you tailor-made packages for rock climbing, hiking, kayaking, biking, paragliding etc. I’m definitely checking out paragliding next time I’m visiting :D. 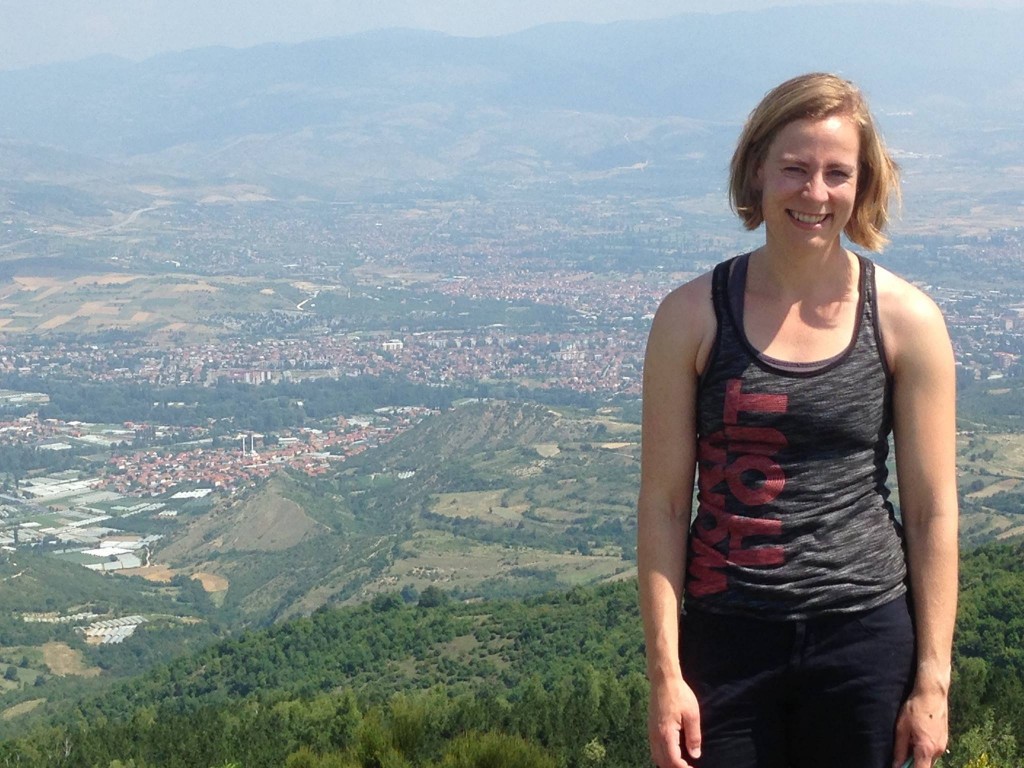 We didn’t finish our hike at Vodno, as our plan was to hike the 10.5km path along the mountain ridge to the gorgeous little gorge Matka. Calmer and colder, Matka Canyon and the Treska river running through it is a popular getaway for tourists and Skopje’s own citizens in the weekend, going there for picnic, fishing, swimming and pure relaxation. 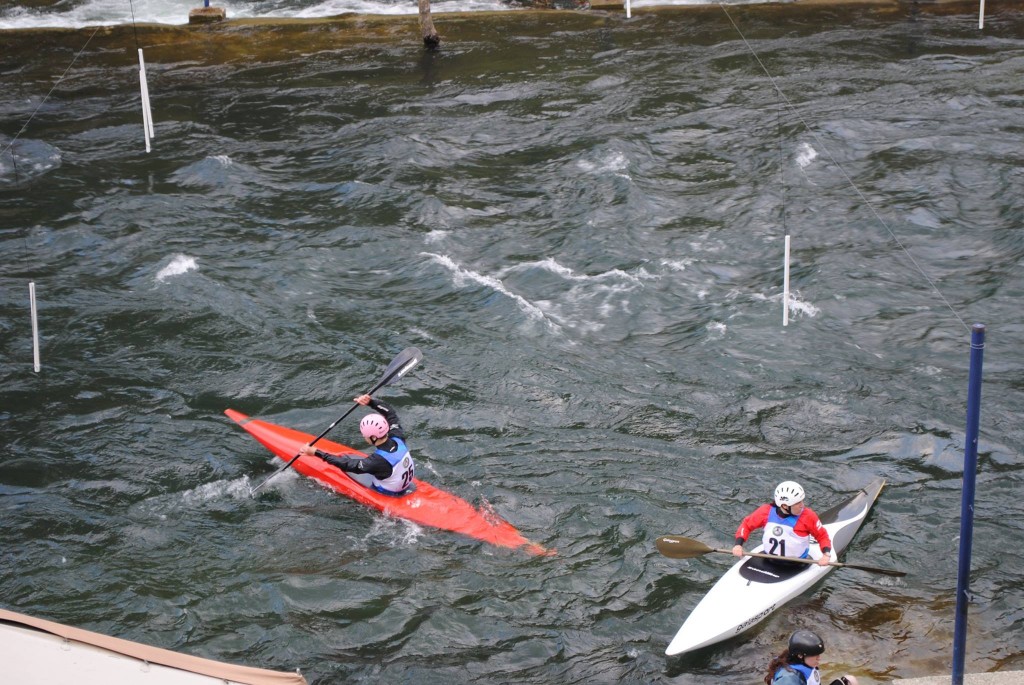 Some medieval building still remains in the canyon, like several churches, monasteries and remnants of a fortress. There are also dozens of caves hidden in the canyon, like the beautiful Vrelo cave full of stalactites. Unfortunately we didn’t have time to visit any of the caves on our hike, but it is definitely on my list the next time I’m visiting.

Descending down from Ss. Nikola Monastery to the canyon is an absolutely amazing experience. Bojan, also being a very experienced rock climber, told me that the Matka Canyon is one of the top spots for outdoor climbing in Macedonia. Standing on the top of the mountain looking down on the very step descend to the canyon and the surrounding walls of rock, it was not hard to understand why. The descend is manageable for most people having some experience with hiking, but it certainly helps not being afraid of heights: P Being accompanied by such a competent and relaxed guide as Bojan made it a walk in the park. I was thrilled having such a funny and knowledgeable guide showing me one of Macedonia’s nicest treasures. Thanks for all the fun, Bojan! 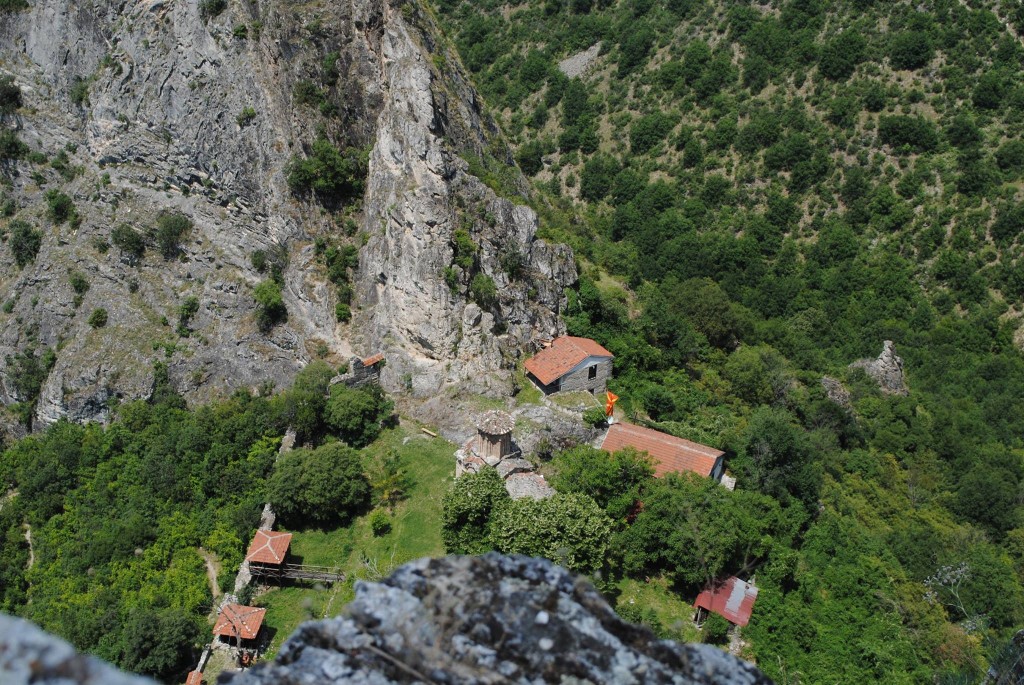 After finishing the hike, some of Bojan’s friends were kind enough to come pick us up for the one hour drive back to Skopje.
The day after I was already on my way visiting another one of Macedonia’s great spots Ohrid. Gorgeous little town on the shores of a lake bearing the same name. Tucked in between Macedonia and Albania and on the UNESCO world heritage site. The trip to Ohrid is worth a visit to Macedonia on it is own, and I can’t do justice to it in this already way to long blog post 😉 It will have to wait till later. Hope my post will tempt you to visit Macedonia. In all it is variety it is certainly going to surprise you. 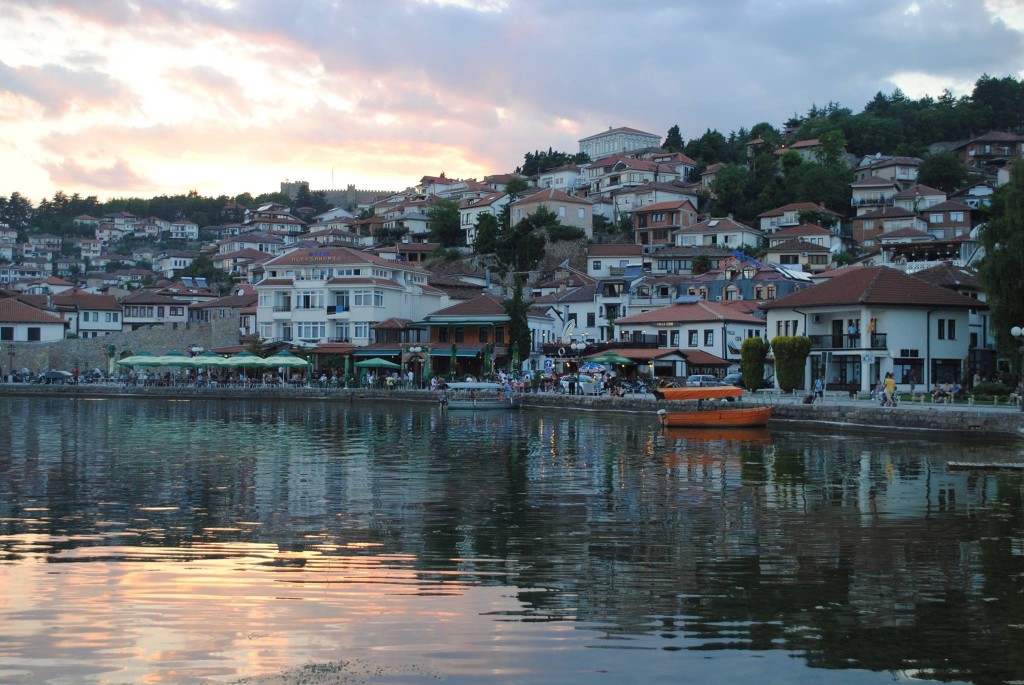